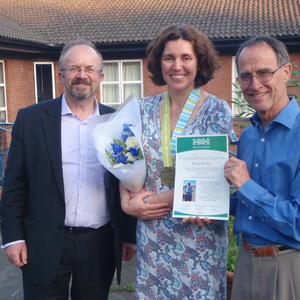 An ambition of a Chiddingfold resident to run a marathon with a childhood friend has led to Holy Cross Hospital receiving a donation of over £3,200.

Rachel Bartlett started running for fitness many years ago. Her friend Penny, who she grew up with, now lives in Germany and was keen for the pair to take part in an event together. The original idea had been to run a half marathon but thinking it might be fun, the pair decided to enter the 2017 Brighton marathon.

In preparation for the 26-mile run, Rachel began her training in winter 2016 with two to three weekly gym sessions, a Saturday boot camp and a long run on Sundays. Before signing up for the marathon, Rachel used to run regularly with her friend Jane White and it was she that generously gave Rachel her support and encouragement by joining her on the Sunday runs.

Explaining why she chose to run for Holy Cross, Rachel says: “It was during a Sunday run with Jane that she asked me which charity I planned to run for. At that point, I had been toying with the idea of supporting one of the large national charities with which I had a vague connection but I was struggling to make a decision.

“Living locally, Jane knew that my brother Richard had been cared for at Holy Cross Hospital 19 years ago after he suffered a brain haemorrhage at the end of the Kingston half marathon. While 19 years didn’t seem like a particular milestone, the fact that he would have been 50 in January was significant. Richard was a much better runner than me and had taken part in the London marathon at least twice. It was for these reasons that I decided to run the marathon in memory of Richard.”

Despite balmy, unseasonal temperatures of 20°c, Rachel completed the marathon in just 04:34:23.41.

Speaking afterwards she said: “The atmosphere was amazing and certainly helped me to keep going. I am extremely grateful to Jane for being by my side during training on those long Sunday runs, my husband Matthew and my two children. My Mum also deserves a special mention as she cannot have found it easy to see me run, yet not once did she discourage me. She and my late Father always tried to take positives from tough situations, which is truly inspiring.”

The money raised by Rachel will be put towards the trial of music therapy for patients at Holy Cross Hospital. The Hospital has recently had good experience of a music therapist working with an individual patient and is keen to explore the benefits for patients more widely.

Commenting on the new project, Christopher Hinton, Chief Executive at Holy Cross Hospital says: “We all offer congratulations to Rachel on a wonderful result, which was achieved through her dedication to careful training. The Friends, Torquil Sligo-Young and I were delighted to have the opportunity to present a certificate to Rachel at the Friends’ Annual General Meeting and to thank her and all her supporters for the money she has raised.

“Music therapy is an exciting new project for Holy Cross and has been shown to help some patients with their recovery from brain injury. At Holy Cross, we challenge the limits to recovery on a daily basis and music therapy may well prove to be another tool that will push the boundaries of our communication and interaction with patients.”

Recent fundraising by supporters of Holy Cross has contributed towards the cost of installing piped oxygen and suction in patients’ rooms and the writing of a chapter for a national clinical guideline about physical management of patients with a disorder of consciousness.