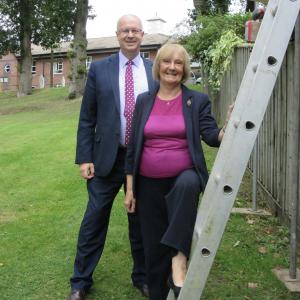 The Mayoress of Haslemere, Councillor Jacquie Keen is facing her fears when she joins the chief executive of Holy Cross Hospital, Dr Ross White, in a joint fundraising event. Despite a life-long fear of heights, the Mayoress will walk with Dr White over the top of London’s O2 building on Sunday 29 September.

Dr White says: “The O2 is 52 metres (171 feet) high and at points the slope reaches 30 degrees, so it is not for the faint hearted. I’m told there is also a slight bounce to the walk too! The idea came from the Mayoress who used to work at Holy Cross Hospital. She mentioned her charity climb in front of our Sister Superior, Sister Mary Agnes, who swiftly suggested that I went over the top too! We’re raising money for some great local causes, so I am really pleased to be doing this feat.”

The Mayoress is inviting people to sponsor her to raise money for the three Mayor’s charities: Haslewey Community Centre, Haslemere Museum and the Stroke Club which meets weekly at Holy Cross Hospital. As well as the Mayor’s charities, Dr White is raising money for Holy Cross’s treehouse project which will see the building of a raised, wooden, wheelchair accessible platform high among the trees in the hospital grounds.

“Between them, the three Mayor’s charities are about facing challenges and developing ourselves, which is why I chose to do the walk across the O2. This will be a personal challenge for me but hopefully one that will be a little easier with Dr White there too,” says Councillor Keen.

Holy Cross is a hospital for people with severe brain injuries, such as those resulting from accidents or a stroke. Patients are highly dependent and stay for months or even years at Holy Cross, receiving highly specialist care.

“Our patients face immense challenges during their stay with us and for the rest of their lives so while the Mayoress and I will certainly be facing our own challenges with this terrifying sponsored walk, we are both delighted to have this opportunity to raise funds for Holy Cross’s patients and other local good causes.”

As well as the medical care provided at Holy Cross, the hospital runs activities and projects to support its patients’ quality of life. The Friends of Holy Cross has raised funds for music therapy, visits to the seaside and purchased a minibus as well as supporting the treehouse project.