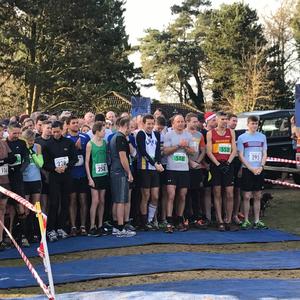 Boxing Day run is a success

Hundreds of runners burnt off thousands of Christmas calories in the annual charity Boxing Day run in aid of Holy Cross Hospital. The run began at the Devil’s Punchbowl Hotel and took participants across the beautiful Hindhead Common, Gibbet Hill and the Devil's Punchbowl.

The Boxing Day run is organised every year by local resident Matt Dellar to raise money for Holy Cross, a hospital providing specialist care to people with very complex needs often caused by profound brain injury or serious neurological conditions. All the profits from the event are donated to Holy Cross.

Christopher Hinton, the Chief Executive of Holy Cross Hospital took part in the race and said: "The Boxing Day Run 2016 was in many ways the best ever. Almost all the places had been sold before the day and there were more than 600 runners at the start.

“In lovely winter sunshine, the Town Mayor Councillor Sahran Abeysundara thanked the sponsors Keats Estate and Lettings Agent, Sports Locker, Haslemere Travel and Hogs Back Brewery and all the runners for taking part. He reminded the runners how the run supports Haslemere’s Holy Cross Hospital before wishing them well and sending them on their way!”

The course took runners on the established route along to the trig point at Gibbet Hill then a swooping descent into the Punchbowl, across the stream and along the valley. This year the mud was easily avoided before runners started on the long uphill track to the transmission mast. From there it was a fast level run to the finish outside the National Trust café. There was also a drinking race over the same 3.5 mile route where runners were served a pint of winter ale at mile two.

“More people than ever before took part in this year’s race. The weather was perfect and it was great to see so many people enjoying themselves. There were several in costume dressed as Father Christmas and one as a snowman,” said organiser Matt. “Many children took part and there were crowds of well-wishers at the finish to cheer the runners home. This all contributed to the buzz which has always been such a feature of Haslemere’s Boxing Day Run and keeps runners coming back year after year. I think the runners and their supporters appreciate getting out in the fresh air after Christmas Day to raise money for such a great cause."

The proceeds of the run will be presented to Holy Cross Hospital, where work is in progress to install piped oxygen and suction into patients’ rooms. This project has been funded from charitable donations including the benefit from the past two years’ runs. After the winners had been presented with their prizes, Chris Hinton from the Hospital, on behalf of all concerned, thanked Matt Dellar and his helpers for their tremendous work in organising the event so successfully.”